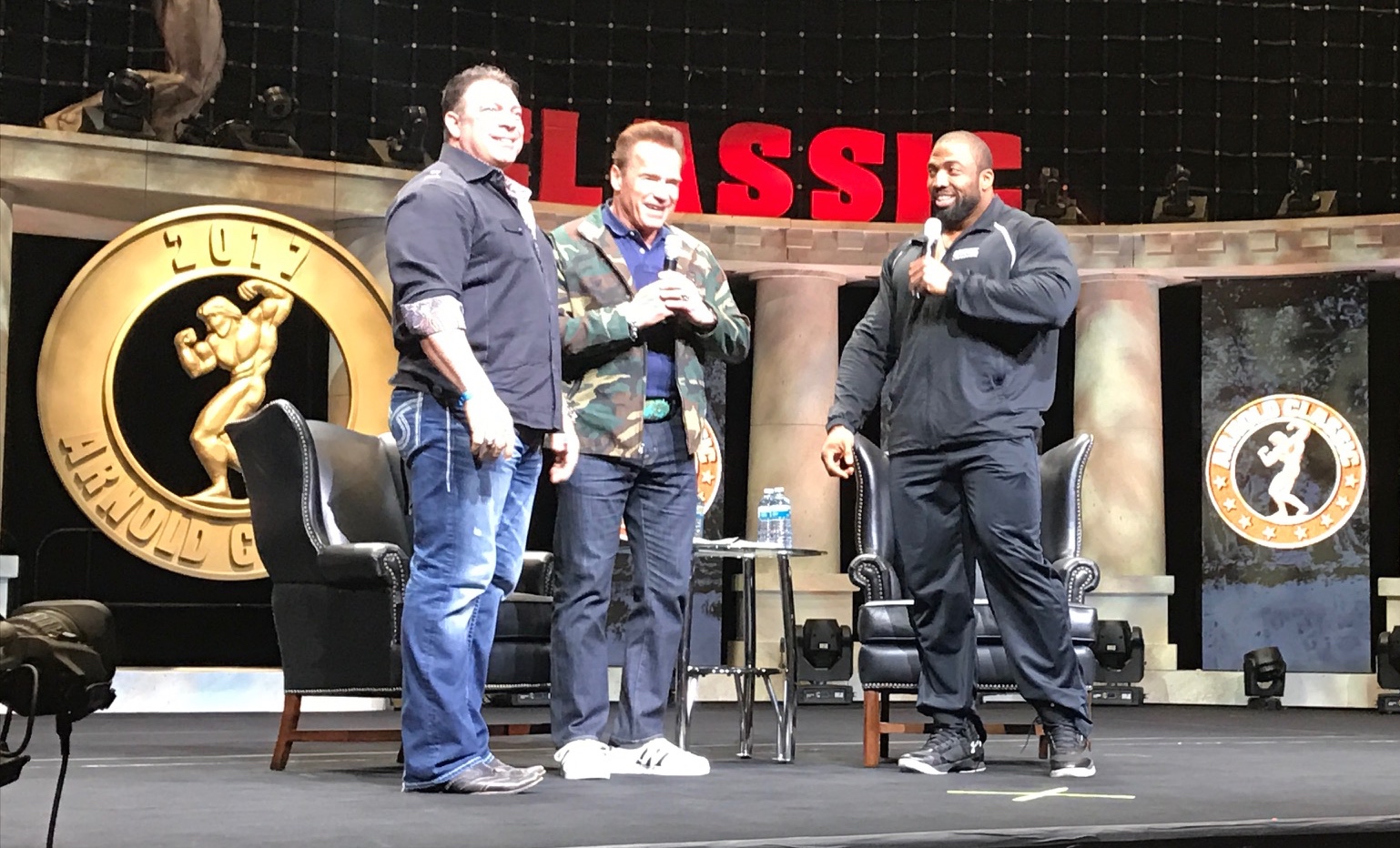 Arnold has a thousand great bodybuilding stories, and many seem to involve long-time pal Franco Columbu.

Newly crowned Arnold Classic winner Cedric McMillan is determined to change the sport of bodybuilding in as big a way as Arnold once did.

And the undisputed queen of Fitness International is calling it quits at the end of the year.

These are just a few of the tidbits and morsels divulged at the Arnold Sunday Showcase, an annual tradition in which many of the Arnold Classic winners share stories with the audience, and Arnold delivers some memories, laughs and wisdom.

Oksana Grishina won her fourth consecutive Fitness International title and announced this is her final year of competition.

Grishina wowed the large Arnold Classic crowd with her physique, gymnastic skills and ability to spin around and inside a 7-foot steel ring. She knew going in that the carpet on stage would be a little slippery for her ring routine, “so I practiced on a little piece of carpet.” All went well until she hit an oily spot and barely maintained her balance.

“I don’t know how I still did it,” Grishina said.

This was McMillan’s first Arnold Classic win and marked his arrival as a superstar. Perhaps the only thing bigger than his biceps is his personality, and the outgoing, philosophical and humorous McMillan treated the Arnold Sunday Showcase attendees to his thoughts on a wide range of subjects.

But first, McMillan told everyone how he began hiccupping immediately after his big win, and couldn’t stop. Finally, someone had him “close my ears and nose and drink at the same time and that did it,” he said, adding it felt like being waterboarded.

McMillan said his goal is to “make bodybuilding more appealing to the general public.”

He also wants bodybuilders to be kinder, especially on social media, and stop bashing one another. “We should embrace each other and celebrate each other’s accomplishments,” he said, adding there’s not one best bodybuilding body type, and competitors and fans should find something to appreciate and applaud in each of the top competitors.

“We should be a beacon of inspiration … just be a decent human being” McMillan said.

And, there’s more to life than bodybuilding, said McMIllan, who is an active-duty member of the US Army, a husband and father. “Take your butt to work and buy your own stuff,” he said, adding bodybuilders shouldn’t depend on their girlfriends for financial support. There’s enough time in the day for work and a workout, especially if you stop taking so many selfies of your muscles, he said.

“You need to be a good man before you can be a good bodybuilder,” McMillan said.

Arnold shared the stage with McMillan for several minutes, and told everyone he’s a huge fan.

“It’s his personality,” Arnold said of what sets the new star apart. “The only way for our sport to become more popular is through interesting people. And (McMillan) has it all, a great personality and a great mind.”

Turns out McMillan grew up idolizing Arnold and went daily to the library at his elementary school to look at the Guinness Book of World Records because it had a photo of Arnold in one of his iconic poses. “I looked at that picture every day,” he said.

Posing was one of the keys to Arnold’s success, and now it’s helping McMillan follow in his footsteps.

“I’m a fanatic about posing,” Arnold said. “It’s the area where you can blow everyone away.” How long a bodybuilder can comfortably hold a pose is the path to success. “The others will shake and sweat and fall apart. Who can comfortably hold their pose and smile at the judges?”

The answer at the Arnold Classic was McMillan.

After McMillan left the stage, Arnold reminisced, prompted by moderator Bob Cicherillo. Franco was in the auditorium and came up on the stage. Arnold told everyone how they first met on October 31, 1965 in Stuttgart, Germany when each won amateur titles.

“We have been friends for 51 years,” Arnold said.

The two were training partners, roommates and competitors. Franco was the chef and Arnold did the dishes, and together they pulled many a prank on their fellow bodybuilders. The powerful pair still hang out, play chess and ride bikes to the nearby Gold’s Gym to workout.

Back in the day, Arnold and Franco started a program to encourage prisoners to lift weights. They often travelled to California prisons for demonstrations and at one there was a monster of a man who could bench press 600 pounds, more than even the diminutive but very powerful Franco (the Sardinian Strongman) could hoist.

“We saw him and Franco said ‘let’s do some warmups first’ and we started jogging around a field,” Arnold said.

There was a touch of genius to Franco’s method, and the giant inmate was soon out of breath and exhausted. Franco had everyone do a few more stretches and exercises and then he put 400 pounds on the bar. “He could not get it up, he was so tired,” Arnold said of the inmate. “Franco said ‘let me try’ and he did three reps.’”

Franco then did a steel-bar-bending demonstration and “they were in awe,” Arnold said, adding his friend then told the inmates that he would teach them to bend steel bars so “you can break out of prison.”

Arnold said a Twins sequel will be made and Eddie Murphy will co-star with him and Danny DeVito as their brother. “We somehow discover he was part of the experiment,” Arnold said.

He then talked about how his mission and the goal of the Arnold Sports Festival is to inspire people to be more physically active, get in better shape and lead more productive lives.

And yes, there was a political question from Cicherillo. He asked Arnold if he thought he could have been president if allowed to run. Yes, Arnold answered, saying he had “a better message.” And no, he’s not upset and accepts the fact that U.S. law prohibits foreign-born citizens from running for the top spot.

“We can still have a tremendous impact without being President of the United States,” said the two-term California governor. “It’s important we’re all involved and give something back.”

One of the ways Arnold is giving back is with what he calls his “environmental crusade,” a battle that has become even more important. He said politicians have become too political and they “should be public servants not party servants.”

Arnold concluded by talking about the importance of finding your passion in life. He found his in bodybuilding, business, films, politics and organizing the Arnold Sports Festivals on six continents - and can’t ever imagine retiring. He’s having too much fun.

“What I tell kids is, have a clear vision of where you want to go,” Arnold said. “Have passion, do something you really enjoy.”