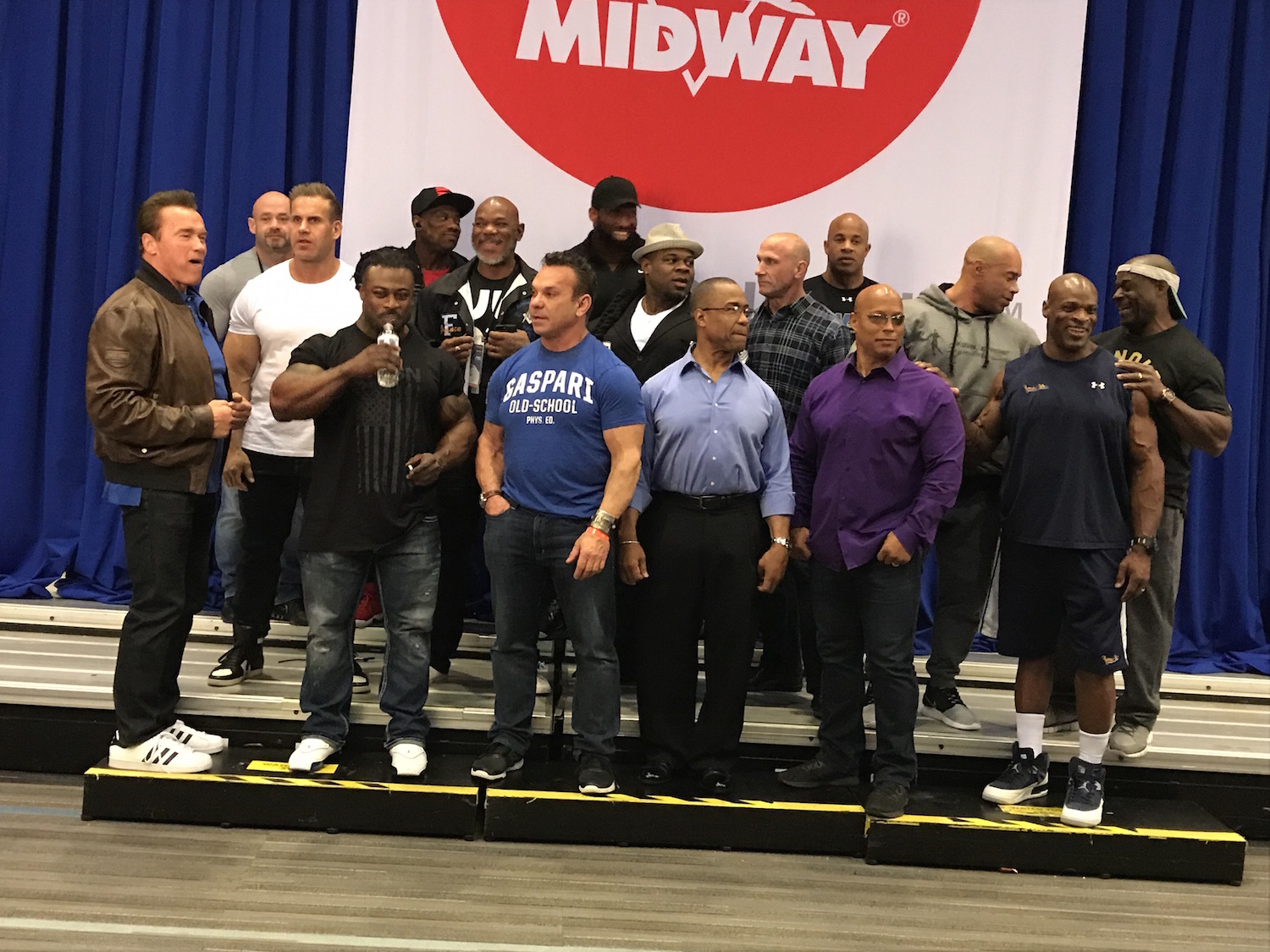 Back in the day, when he was the biggest star in bodybuilding, Arnold wasn’t happy with the world’s perception of his sport. Or the distinctly unmuscular size of the prize money.

“I was mad when I saw baseball players and football players making millions of dollars,” Arnold said on Sunday during the Arnold Sunday Showcase & Coffee With The Champions. He and training partner and best pal, Franco Columbu, were getting paid $65 a week by Joe Weider, and had to start a bricklaying company just to make ends meet - and to buy their steaks and hamburgers.

And so, the determined Arnold and his business partner, Jim Lorimer, eventually created the Arnold Classic in 1989

“I had a clear vision of where we wanted to go,” Arnold said, adding the destination he had in mind was a multi-sport event built on a foundation of muscles that would initially “promote bodybuilding and increase respect for the sport and the prize money. We wanted to popularize bodybuilding to the general public and inspire others to compete. We added powerlifting and weightlifting and more and more sports and now we have 78 different sports.”

The Arnold Classic grew into the Arnold Sports Festival, and the world’s largest multi-sport festival celebrated its 30th year this week. It’s possible all this massiveness may have exceeded Arnold’s dreams, but then again, the bodybuilding icon, movie star, entrepreneur, advocate for the environment and former governor is known for thinking big. Really big.

“What I’m proudest of is that this is fitness for everyone, a celebration of health and fitness,” Arnold said. “We want to inspire others to compete.”

Sitting with him on the stage of the Battelle Grand were past winners of the Arnold Classic, from the first winner, Rich Gaspari, to William Bonac, who won the coveted title and $130,000 the night before on the same stage.

These are powerful men who are proud of their accomplishments and still competitive with one another.

“I told Dexter that if you ever think you’re going to break my record of four wins, you better wake up and slap yourself,” Flex Wheeler said, adding that over time he’s been able to let go. “Records are made to be broken and if anyone did it, I’m glad it’s Dexter.”

As for Dexter, he’s far from finished, which is great news to his many fans. “Why stop?” he told the large gathering. “I’m only 48. That’s not old. Why retire when I’m still on top of my game?”

Arnold said he was “in awe” of Dexter’s ability to compete at such a high level at his age. “I saw how tough it was once I was over 30. There were more injuries and it was harder to heal. So, this is a very unusual situation and only (Dexter) can tell us how he does it.”

Gaspari was one of the biggest names in bodybuilding back in 1989. “I entered the first Arnold because Arnold called me up and personally invited me,” he said, and then launched into a spot-on imitation of Arnold inviting him and promising how it would be huge.

“I’m so proud that this is the largest sporting event in the world and a bodybuilder started it,” 1990 winner Mike Ashley said.

Vince Taylor (1992 winner) revolutionized bodybuilding with the creativity of his posing. “That was my way of expressing myself and how I communicate with the audience,” said Taylor, who was cheered on by the crowd until he gave in and did a few steps from his famous Terminator routine.

During his wide-ranging and history-filled talk, Arnold talked about the current state of bodybuilding. While he admires the sheer bulk of the new generations of champions, “we want to keep the traditional physique alive that we had in our day, the classic physique,” Arnold said.

To accomplish this goal, there is now a new category: the Arnold Classic Physique, which limits the weight of competitors. “This forces you to use everything, every ounce of your talent,” Arnold said. “Bigger is better and is the natural evolution of bodybuilding, but we want to see the waist small and the shoulders wide and more attention to posing.”

Columbu joined Arnold on stage and they talked about the old days. And their bodybuilding diet. Or lack of one.

“Our diet was we didn’t have dessert,” Columbu said.

Arnold said he and his training partner had very different training regimens. Arnold trained five hours a day and Columbu trained for three. “I over trained, that’s how I got definition,” Arnold said.

The two old friends also told a humorous story from their days as masons in Los Angeles in the 1970s. Franco was the expert bricklayer, while Arnold was his well-muscled gopher. They formed a company and put an ad in the Los Angeles Times newspaper advertising their new, European Bricklayers company.

Soon after the ad ran, “there was an earthquake and we got all these jobs, day and night, and we made a lot of money,” Arnold said. On one site, Franco decided to charge $5,000 for a job that, truth be told, was about a $2,000 job. The prospective client wasn’t happy.

“Let me talk to (Franco),” Arnold told the prospective client. “Maybe I can get him to come down.”

And so, Arnold and Franco stepped away and started arguing, quite loudly and rather fervently, and in German. “(The client) couldn’t understand a word we were saying,” Arnold said, adding it was a business ploy rather than an actual argument. Finally, the heated argument ended. “I told him I was able to get Franco down to $4,000 and he was happy with that.”

From these humble beginnings, Arnold and Franco went on to rather remarkable careers in bodybuilding and several other ventures.

“We were immigrants,” Arnold said. “We loved America and we wanted to give something back to thank America for welcoming us.”