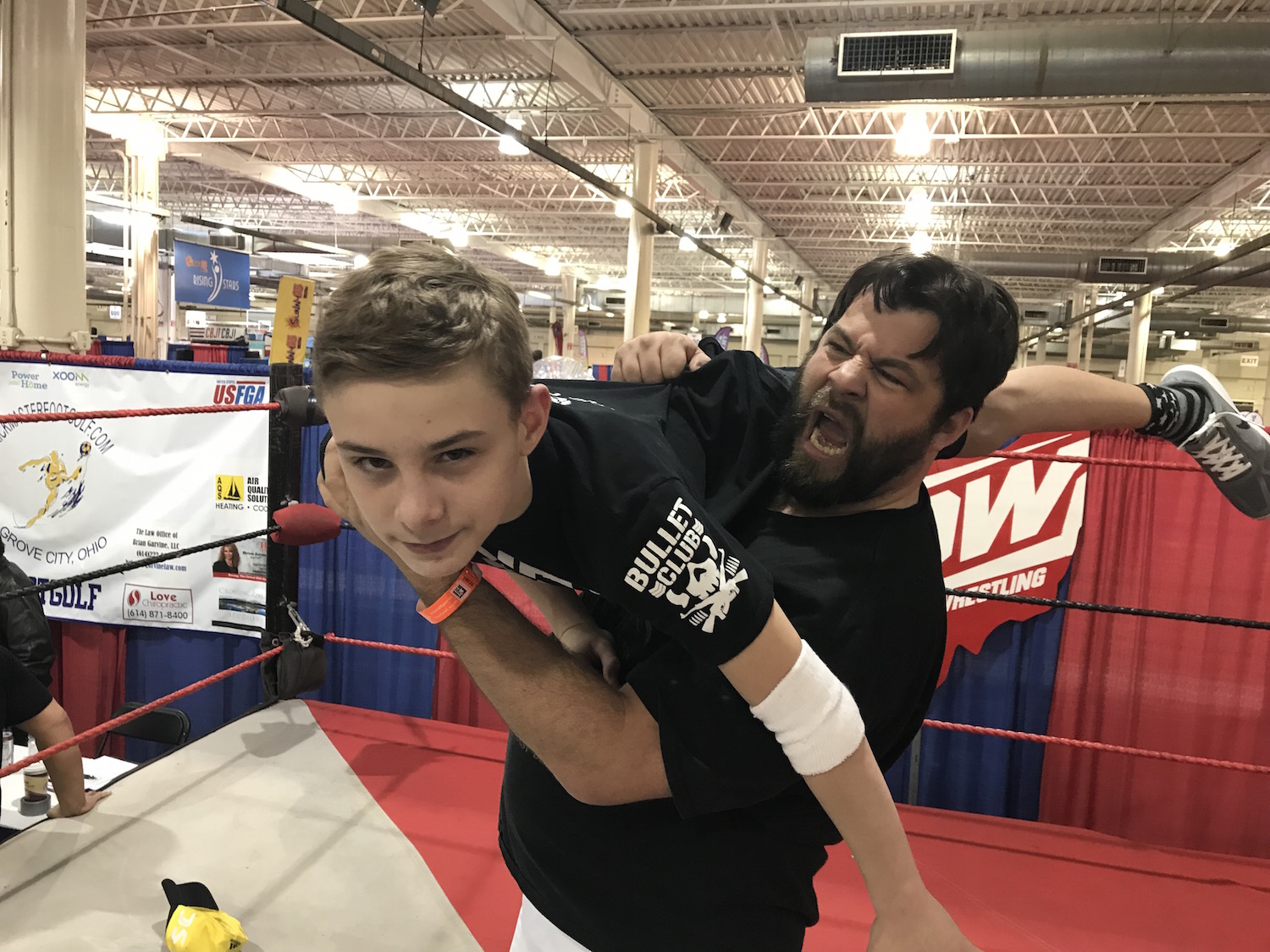 Beware the fury of Vinny Venom, an up-and-coming wrestler who comes from deep beneath the surface of the earth and is half-man, half-spider.

Venom’s signature move is the stinger, in which “I pick someone up on my shoulders and slam them onto their back.

Then again, Vinnie Venom is actually Vinny Brookshire. He’s 13, 4-foot-11 and 86 pounds. So, he’s not that intimidating of a wrestling character. Yet. Both Vinnies were at the Arnold SportsWorld Kids & Teens EXPO on Saturday to take part in the Ohio Pro Wrestling Academy Fantasy Camp. This was one of the hundreds of activities that the thousands of kids attending the EXPO can do (the EXPO continues Sunday at the Ohio Expo Center).

“I’ve been a huge professional wrestling fan since 2014,” said Brookshire, who has a pair of homemade Vinny Venom tights that feature a spider logo and snakes on his legs. “I love wrestling. It helps you escape if you’re sad or a little down. You can watch wrestling and it changes you, you feel like you’re part of a community.” Brookshire has his sights set on a career as a professional wrestler, which means he was at the right place. The Arnold Sports Festival and the EXPO are all about working hard to accomplish big dreams.

“(Vinny) has all the potential in the world,” said James Avery, the head trainer of the Ohio Pro Wrestling Academy in Newark, Ohio. “Wrestling is all about passion and he has a lot of passion.”

Avery’s wrestling persona is the Stretcher because “I stretch them into pretzels and knots.

And yes, we’re also wondering if Vinnie Venom could sting the Stretcher before he got himself all tied up into a pretzel.

This Irish Dancer Loves the Arnold
The EXPO is an almost overwhelming blur of stimulation. There are booths in the Bricker Building where you can: shoot hockey pucks, play chess, fling a lacrosse ball, take on an obstacle course, ride a zip line, roll in a human hamster ball, kick a soccer ball at a 10-foot-high target, learn martial arts and create art.

And there are championship competitions in baton twirling, gymnastics, powerlifting and several other sports at other venues around the Ohio Expo Center.

“I’ve been dancing at the Arnold since I was 11,” said Deirdre Houston, 21, a senior at Ohio State and a member of the Richens Timm Irish Dancing troupe from Dublin (the one near Columbus, not the one in Ireland). “Before there was the kids EXPO, we’d dance downtown.”

Houston loves the structure and fast pace of Irish dancing, which requires a lot of practice, energy and the ability to move your feet really, really fast and in synch with the other members of troupe. Her strength is her strength and leaping ability, while she said her weakness is a slight problem holding her arms tightly against the sides of her torso while she dances.

The Timm troupe has won numerous regional and national competitions, and Houston placed 10th in the individual competition at the most recent national championships.

“The Arnold is such a sight to see and is so great for people watching,” she said. “I’m very interested in working out and it’s great to come here and see all these people who are great in so many sports and learn from them.”

Robin Hood Has Nothing on this Kid
Over at the Lausche Building, diminutive archery prodigy Matthew Harper, 11, was filling some foam turkeys, bears and deer full of arrows.

“My dad introduced me to archery and showed me how much fun it was,” said Harper, who quickly developed into an ace archer and began winning age-group titles at state, national and world International Bowhunting Organization (IBO) championships.

There were three age-group categories at the IBO championships at the Arnold: elementary school, middle school and high school.

Harper, a 5th grader, easily won the elementary school championship for the second consecutive year, with a score of 294. And, get this, he was second overall, tying the score of the high school division winner Larry Eyman, who won the tiebreaker (the most bullseyes) to nab the title.

The outgoing and fun-loving Harper was disappointed, for a minute or two, and then shrugged and resumed tossing a Frisbee with his teammates.

Harper also plays football, baseball and he wrestles and skis. And, he’s already developed a winning formula for archery. “It starts with determination, you have to want to practice,” he said. “It’s 50 percent mental and having the right mindset, 30 percent skill and 20 percent wanting to do it and having fun.”

This was an IBF 3D championship in which the hundreds of boys and girls competing shot at foam animals rather than paper targets. The IBO also holds state, national and world championships using paper targets, and Harper has already won a shelfful of trophies in these championships.

“Before a tournament I like to stretch to get the nerves out and listen to music, pump up music,” Harper said. “And then I visualize shooting and hitting all my reference points.”

His older brother, Nate, 14, finished second in the middle school championship with 287 points.

Ronda Rousey Makes Their Day
The most anticipated event at the EXPO was the arrival of Ronda Rousey, the former MMA champion and superstar, who recently signed to wrestle in the WWE.

“We’re all such huge Ronda fans,” said Nick Auddino, who was with his son, Jordan, 8, and daughter, Laina, 4, and was carrying a life-size cardboard cutout of Rousey he was hoping she would sign. “We’ve watched her since she got started and we love her.”

The Auddinos were first in line for the meet and greet and waited patiently for Rousey to arrive. “Jordan was over there,” Auddino said, pointing across the EXPO, “playing soccer most of the day.”

When Rousey arrived, the EXPO erupted in cheers.

She waved over the Auddinos, chatted, posed for photos – and signed the giant cardboard cutout.

“It was amazing,” Auddino said.