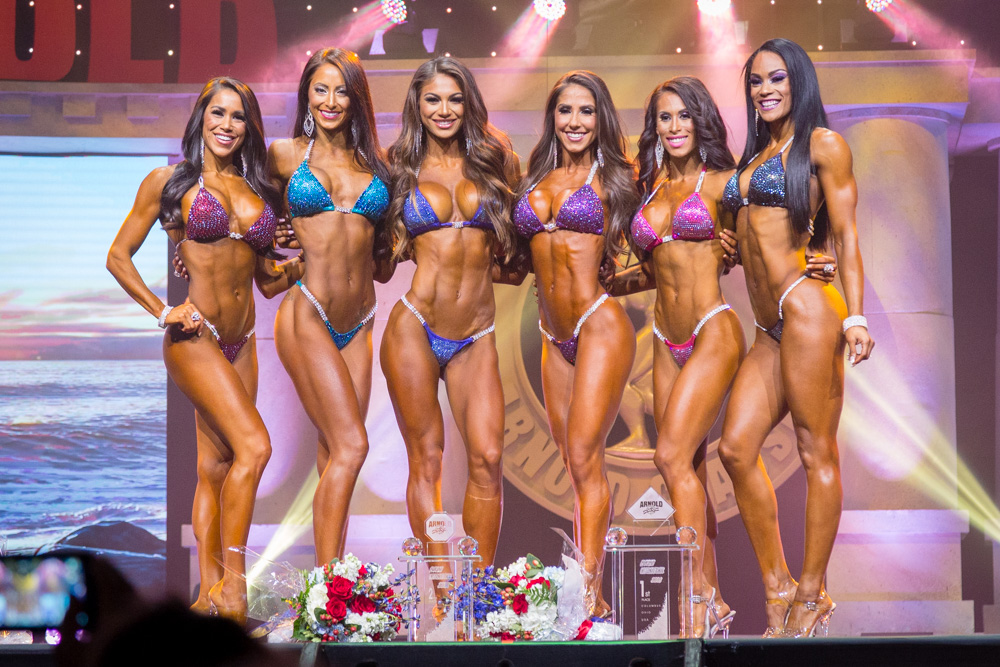 The Arnold Classic isn’t just about the dudes. The female athletes of the IFBB Pro League are a major part of the weekend and the 2019 International competitions are definitely shows to watch. Whether you’re into the bikini look, showcasing your figure, or want to be entertained by the fitness division, you’ll be inspired by the women who are looking to win a major title and qualify for the 2019 Olympia.

Whoever wins this show will likely be considered the #1 contender to reigning Olympia champion and previous Bikini International champ Angelica Teixeira. She isn’t in this lineup but this event is star-studded including one name who is recognized as one of the best ever.

Lauralie Chapados – Chapados was the runner-up at the Olympia in 2018 but has been victorious in four other shows since turning pro. Outside of this show, she’ll also be a part of the Arnold Australia which takes place a couple of weeks after the Arnold USA Weekend.

Ashley Kaltwasser – Kaltwasser is considered by many to be the greatest bikini athlete in the history of the division. She has won this event twice and the Olympia three times. She’s also one of the most popular athletes in the industry and that includes the male competitors.

Janet Layug – Layug placed 3rd at the Olympia in 2018 but has won on an Arnold stage – winning the Arnold Australia in 2015. Any event she has competed in leads to her being in the mix for the win. This show will likely be no different. Her last appearance was at the Shawn Rhoden Classic which she won. She is also a past Hooters International winner.

Kim Gutierrez – The first IFBB Pro League athlete from Chile has been knocking on the door for a while now. She was out of the running at the Olympia but has already won the Legends Classic earlier this year. This will be her first show at the Arnold USA.

This might be the most unpredictable division. The reigning Olympia champion was actually defeated in this show last year but she rebounded to repeat at the Olympia in 2018. There are new contenders looking to upset the champ.

Cydney Gillon - Gillon is that previous champion that was referred to earlier. The 2017 Olympia champ was actually relegated to 2nd at the 2018 Figure International by Candice Lewis-Carter. However, she avenged that loss in Las Vegas. Now she looks to redeem herself in Columbus so she can hold both titles. If she was to win, this would be her first Figure International win.

Nadia Wyatt - With Carter not in this lineup, the 3rd place finisher at the Olympia is Gillon’s biggest threat. Nadia Wyatt has been showing a lot of improvement in recent photos and can definitely stop Gillon if she’s on. This matchup will be an interesting one to say the least.

Jessica Reyes Padilla – Padilla comes from Puerto Rico and never takes an opportunity to compete for granted. You have to be on if you’re going to beat her because the chances of her being off are not good. She was 4th at the 2018 Olympia.

Carly Starling-Horrell – Horrell rounded out the Top 5 at the Olympia in 2018. She has won two other shows in her career and is also going to be competing in Australia right after this show. If one of the other contenders is off, she will take advantage.

The fitness division is the most entertaining division in the IFBB Pro League. Not only is this division about the physique it’s also about the athleticism and creativity they can display in the night show. So to win you have to have both the show and the go. The top 4 from the Olympia in 2018 are the contenders to watch at this show to start the 2019 season.

Whitney Jones – Jones had quite the 2018 season. After overcoming a neck injury, she won the Fitness International. She did it with a torn ACL she didn’t know she had. She would then overcome that as well to win the Olympia later that year. With the retirement of Oksana Grishina, she’s now the #1 fitness division athlete in the world. She obviously plans to retain both titles in 2019.

Ryall Graber – Graber has won six pro shows overall including the 2018 Arizona show and was the runner-up to Jones at the Olympia last year. She appears to be stronger and improved going into the new season. The Canadian will start in Columbus before flying across the world to compete at the Arnold Australia event.

Myriam Capes – Capes is one of the veterans of this division, having made her Arnold Classic debut in 2010. “Mimi” has competed at the Olympia 10 times now. She was 3rd in 2018. She was 4th at the 2016 Fitness International which was her last appearance in Columbus.

Missy Farrell-Truscott – Truscott has won 3 shows and was 4th at the Olympia in 2018. It would be a great confidence booster if she can bump one of those Top 3 and make the podium in Columbus.