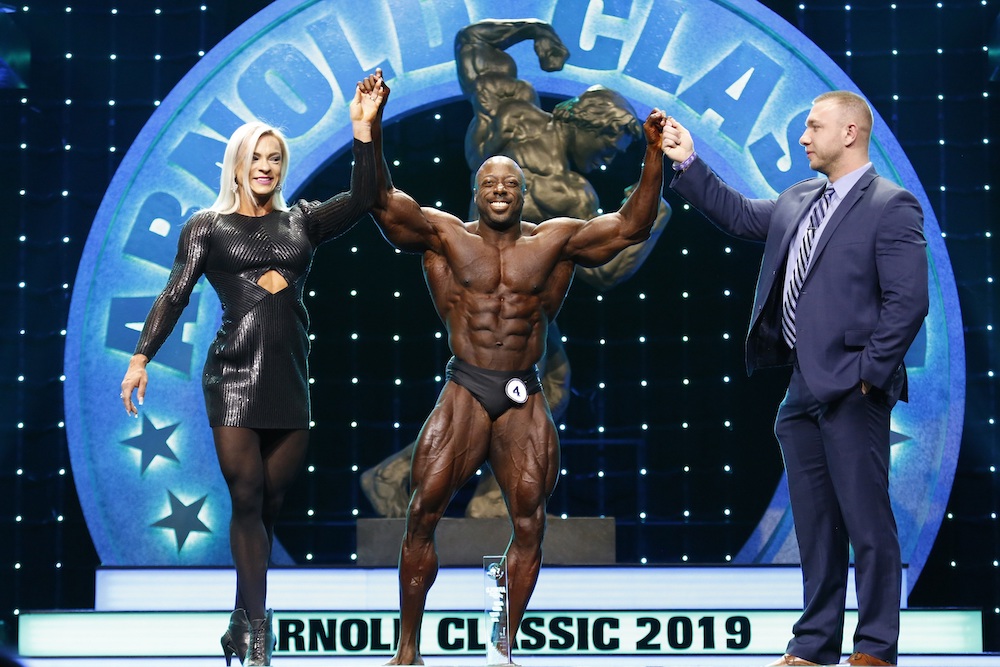 The first night of the 2019 Arnold Classic is much more than a traditional bodybuilding show. It’s the start of the IFBB Pro League season and as IFBB Pro League President Jim Manion explains, it’s a reminder that it’s time to get serious about bodybuilding and fitness again.

“This has been and still is a great relationship that we have with the Arnold and it reminds us all that it’s time to get going again. Even in January and February some of us still don’t really go all in and the Arnold is what we need to go back into training hard and moving forward again.”

The four competitions that took place on the Battelle Grand stage in Columbus, Ohio were certainly both an entertaining and inspiring way to start this season off. Whether you’re into classic muscle or showcasing fitness, the athletes all delivered tonight.

George “Da Bull” Peterson was considered the favorite tonight but had to face a determined Steve Laureus as well as an incredible Top 6 lineup if he were to claim the Arnold Classic Men’s Physique title. This show was so well contested that Arnold Schwarzenegger made it a point to compliment all 6 men on their physiques and presentations.

At the conclusion of the posedown, Arnold would be interviewing “Da Bull” and Peterson leaves Columbus as the champion. His focus now is on facing Breon Ansley and winning the Olympia later this season.

After the event, Peterson put into words what it’s like to be standing center stage and be interviewed by Arnold. “You see guys you look up to like Shawn Ray and Flex Wheeler being interviewed by him and then when you’re there yourself you have to pinch yourself and make sure it’s real because you think about that moment for so long. When you know it’s real, it’s an amazing feeling.”

Cydney Gillon came into this show for the 2nd straight year as the Olympia champion but last year she was actually defeated on the Arnold stage. History would not repeat itself in 2019 as Gillon presented muscle that was simply unmatched and a shape that was not going to be denied 1st place.  Nadia Wyatt would finish 2nd and had a great overall physique in her own right but the champion was in as great of shape as she had ever been in.

Whitney Jones arrived at this show as both the reigning Fitness International and Fitness Olympia champion. It’s not often that you see someone who holds both titles not win the next year. Jones had a routine that was both entertaining and athletic but she was actually a historic upset in this show.

Ryall Graber had competed in this show several times but never was able to secure the victory. The stars aligned in her favor tonight and she was crowned the 2019 Fitness International Champion. This now clearly makes her the #1 contender to the Olympia title later this year.

In the Women’s Physique division, only the Top 10 move on from prejudging to the finals and are able to pose on Friday night. It’s always a tight division and it’s hard to determine who the favorite is from one show to the next.

So when Natalia Abraham Coelho came out for her posing round, she knew she had to be on point and delivered. The crowd was split between her and Sheronica Henton who was impressive in her own right. The judges have the final decision to make and the decision went in favor of Coelho.

The Saturday Night festivities at the Arnold Classic stage will include the finals of the 2019 Arnold Classic, the final round of the Arnold Strongman Classic, the Bikini International, and Arnold Men’s Physique finals. For more information on those events as well as the Webccast where you can watch the action live, go to www.arnoldsportsfestival.com