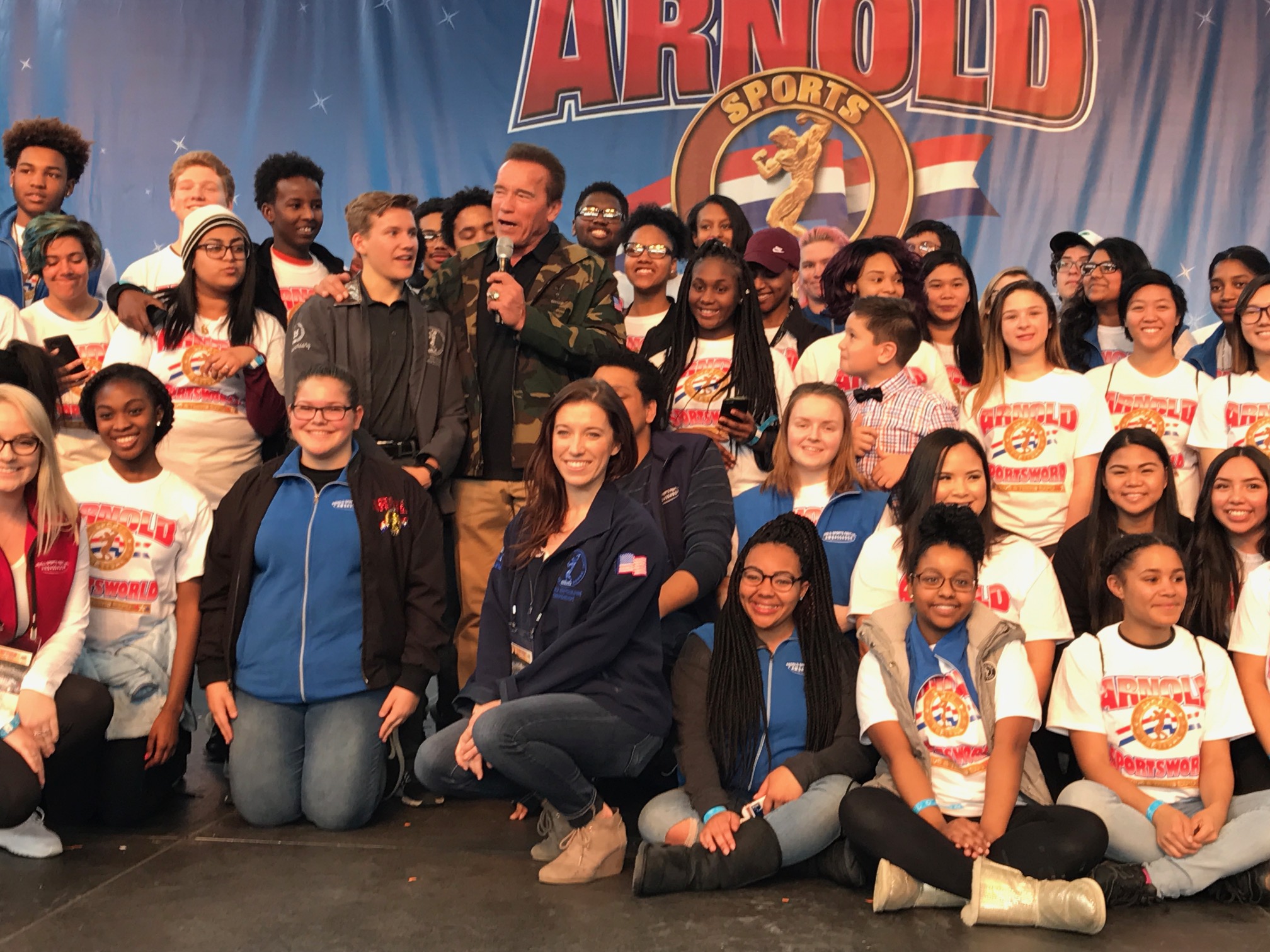 Zachary Zimmerman’s first moment of glory - and applause - came several minutes before he competed in the Arnold’s Quest For Talent at the Arnold SportsWorld Kids & Teens EXPO.

“I asked him if I could have a picture,” said Zach, who is nine years old and chock full of talent and personality.

The “him” was Arnold, who had just stepped off the EXPO stage, where he posed for photos with the Arnold Sports Festival Ambassador volunteers and spoke to the large crowd.

“This is all about family fitness, for the youth and for the old, for the men and women, everyone here can participate,” Arnold said. He encouraged everyone to exercise every day “and make it a family affair.”

As Arnold walked down and into the backstage waiting area, Zach – who sang and tap danced in the talent show - looked up, way up, and asked for a photo.

“He took my hand and took me up on the stage and raised my arm,” Zach said of what happened next, which included a big hug. Zach was still smiling with joy and vibrating with excitement a few minutes later. “It was so awesome to get that experience."

Like so many others, Zach was inspired by Arnold to follow his dream. “I want to be a singer and a dancer, or work with animals,” he said.

The Kids & Teens EXPO at the Ohio Expo Center is all about the experience, fitness and getting inspired. And even if you don’t get to meet Arnold, there’s just so much to do. There’s a zip line, human hamster ball, an archery range, rope climb, Ninja Warrior obstacle course that includes a warped wall, non-stop chess matches, face painting, basketball courts, a football skills course and … well, you get the point. The big Bricker Building was filled to the brim with an abundance of fun activities for kids.

So much so that Joshua Perry was envious.

“I’m looking around here and it’s like a giant paradise for kids,” said Perry, a star Ohio State linebacker now playing for the Los Angeles Chargers. He was part of a panel, along with Buckeye football players Joe Burger and Craig Fada, and they talked about overcoming obstacles.

“I’d like to try that,” Perry said, pointing toward the human hamster ball. “And the zip line. They look like a lot of fun.”

Robert Wilkins, 10, has been coming to the Arnold since before he was born. Trust us, it’s possible.

“I’ve been coming since my mom was pregnant (with me),” he said after he took a turn on the zip line at the Hocking Hills Canopy Tour and ZipZone Canopy Tour booth. “This makes 11 years in a row. It’s fun ‘cause there’s a lot of stuff to do.”

His advice to kids and teens new to the EXPO is simple: “Get a snow cone and do the giant ball and the zip line and all the other sports stuff.”

The hamster ball at the Cool Cat Sites Entertainment booth was one of the EXPO’s more popular activities.

“It was actually really awesome,” said Miramani Anderson, 9, who took a turn inside the large plastic ball, rolling up and back inside the clear, plastic sphere. “I was a little dizzy, but not a lot. You just push with your arms and you go.”

She came with her brothers and dad, Don. This was their first Arnold and they took a turn at almost everything, and also played in the basketball tournament. “It’s great to bring the kids here and let them run wild,” Don Anderson said. “It’s not what I expected, it’s a lot bigger and better.”

“This is my first time trying this and it’s so amazing,” said Cori, 12, of the Flip Factory booth that featured the Ninja Warrior obstacle course. She flew up the dreaded warped wall easily, and so did Kacee, 8, who is less than half the size of the wall.

“I just ran up to it and kind of jumped up it,” Kacee said.

These two natural athletes also took a turn on the rope climb at the other end of Bricker, easily made it to the top and waved and smiled as mom took photos.

The large stage in the center of the EXPO featured a non-stop variety of acts including an Irish Dance and a taekwondo demonstration, the football panel, talent show, fencing, competitive break dancing, and Omega Man (AKA: Marc Wilkins). In his strongman act, Omega Man bent a frying pan in half with his bare hands. “It’s a basic Wal-Mart frying pan,” he said. “I take ‘em back after and say, hey, it’s broken. No, I’m kidding. I gave it to one of the kids in the audience.”

In addition to all the activities at all the booths and on the stage, there were also a wide range of competitions for kids and teens. The Ohio Expo Center has a lot of facilities, and they’re needed for the Arnold.

The girls of Five-Star Gymnastics in Brunswick, Ohio won the Level 8 team title of the Arnold Gymnastics Challenge.

The girls had some time to tour the other activities, at the Ohio Expo Center and downtown at the Greater Columbus Convention Center. They were especially impressed with the bodybuilders.

“Oh my gosh,” Jordyn said. “How much time does it take to get all those muscles?”

About as much time as you devote to gymnastics?

“This is our favorite competition,” the coach said, adding it’s because in addition to the large and prestigious cheerleading competition, “there are so many other things going on.”

There’s another reason Lucas and her girls love the Arnold: “The trophies here are bigger.”