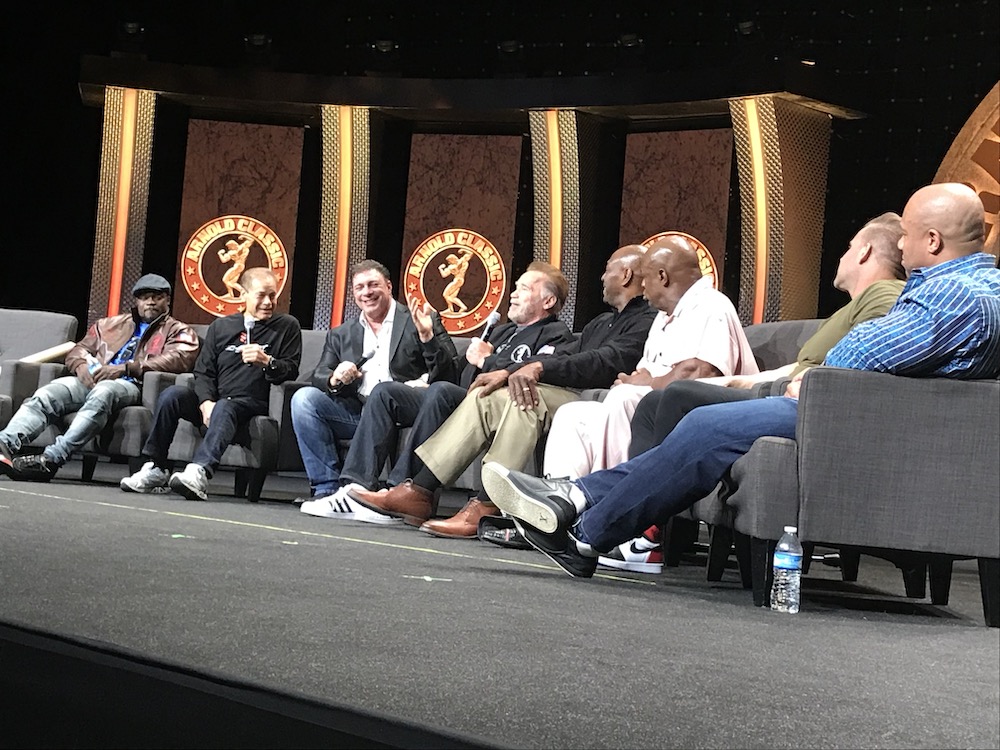 It’s the final day of the Arnold Sports Festival, and time to spend some time with Arnold.

“Attention everyone, the Governor will be here in five minutes,” someone said over the PA system at the ballroom dancing competition.

“Being at the Arnold opens the eyes of the general public about what we already know about ballroom dancing, all the grace and athleticism … and that men can dance,” said Bill Sparks, one of the organizers of the competition, which includes smooth, rhythmic, Latin and ballroom categories.

Arnold stops by every year, Sparks said “because he danced the tango in that movie, True Lies, and really likes this competition.”

Several pairs of dancers put on an exhibition for Arnold, including Ethan Hayutt, 12, and Anastasia Lepin, 11, who have skills well beyond their years. Several times Ethan hoisted Anastasia above his head and spun her around. It was quite impressive, and Arnold led the applause.

“We practice a lot and once I kicked him in the face and another time in the head,” Anastasia said. Ethan just shrugged, as if to say: It’s all part of ballroom dancing, no big deal.

The two tiny dancers posed for photos with Arnold, who then headed over to the …

Listen to the Legends
Arnold Sunday Showcase & Coffee With The Champions, to join fellow bodybuilding legends Ronnie Coleman, Jay Cutler, Lee Haney and Phil Heath on the stage. They group tried to do the math and add up how many Mr. Olympia titles they’d won over the years.

“There are three kinds of people,” Arnold joked to the hundreds of people who gathered for the annual talk. “Those who can count … and those who can’t.

Brandon Curry, the winner of the 2019 Arnold Classic joined the five legends on stage.

“It hasn’t fully hit me yet,” he said of his win, a mild upset of defending champion William Bonac. “I knew it would be a battle between Will and me … I did my homework and was ready.”

Arnold talked about how hard it’s to peak for a competition. “It’s very hard to get to that exact sweet spot and that’s what you did,” he told Curry. “You were 100 percent for that hour, everything was perfect.” And this, he continued, is vital, because the top five or six competitors are oh-so close and whoever is dialed in perfectly will most likely win.

Being The Best Arnold
Moderator Bill Cicherillo asked Arnold which version of Arnold was the best version.

“That’s hard to say,” Arnold began. Perhaps it was 1974 when he was a ripped, muscular and pretty-much perfect 246 pounds and dominated the sport. And then, he was asked to lose weight, a lot of weight, to co-star with Sally Field and Jeff Bridges in Stay Hungry. The director didn’t want him to look too much more massive than his co-stars.

“We finished shooting in early July,” Arnold said, adding he was down to a very lean 210 pounds. There wasn’t much time until Mr. Olympia, which he had won the five previous years. “I could only get up to 233 or 234 pounds on the day of the competition. I was ripped but light. Some thought that was my perfect body, but I felt I was too light and felt uncomfortable.”

Arnold won the competition. Was there ever a doubt?

A Helping Hand
Lee Haney told the story of how Arnold helped him win the first of his eight Mr. Olympia titles, which broke Arnold’s record of seven.

A few hours after the competition, at a gathering, Haney was down and depressed. “And, lo and behold, who comes over? Arnold. He says you look great on stage, but you need to do something about your posing and he said I’ll introduce you to my posing coach in California … and that once I got the posing down I’d be Mr. Olympia.”

Haney went on to say he thinks Arnold was testing him, to “see if I had it in here” and if he had the humility to take the helping hand Arnold offered, and follow through and do the work it required to be the best of the best.

He did. And won the title the next year, and seven more in a row.

Say Cheese
Franco Columbu joined his long-time friends Arnold and the other legends on stage, pumping up the number of Mr. Olympia titles to 38.

They talked about how Joe Weider played a significant role in each of their careers, and how posing for a photo shoot for his magazine a day or two before an important competition helped them win.

“Those photo sessions were the most difficult things you could do,” Arnold said.

Weider would have them hold poses for several seconds, maybe a minute, sometimes even longer. And he’d ask them cough, which would add a little bit extra to a flex. Arnold and Franco would hold poses so long they would start to tremble and shake.

“You never want to shake in front of the judges, that looks amateurish,” Arnold said, adding all the extra-long posing they did for Weider helped sweat out any extra water in their bodies, perfect their posing techniques and eliminate the shakes when they “only” had to hold the poses for a few seconds during the competition a day or two later.

Ready for More
Heath won seven consecutive Mr. Olympia titles, the last in 2017. He was second in 2018 and is battling injuries, and not quite sure what’s next.

“Seven years is a long time and a lot of work,” he said, adding that, following a recent surgery, he’s back in the gym and training, which drew a big cheer from the audience. “Who knows what’s next. I’m excited to be healthy and back in the gym. I still have that fire.”

Arnold did a little pitching, encouraging Heath to compete in the 2020 Arnold Classic. Doing several big events within a short time period can lead to momentum, confidence and victory.

“That’s how I won my first Mr. Olympia,” Arnold explained. He won a big event in London, flew to Columbus to compete in the Mr. World competition a day later, beat Sergio Oliva for the first time “and 14 days later I beat Sergio (again) for the Mr. Olympia title.”

A few seconds later, someone tapped Arnold on the shoulder and whispered in his ear. A couple hundred people were waiting for him at a luncheon. It was time to go.

“Machines don’t eat,” Arnold joked, and the audience roared … and Arnold told a few more stories before he left.