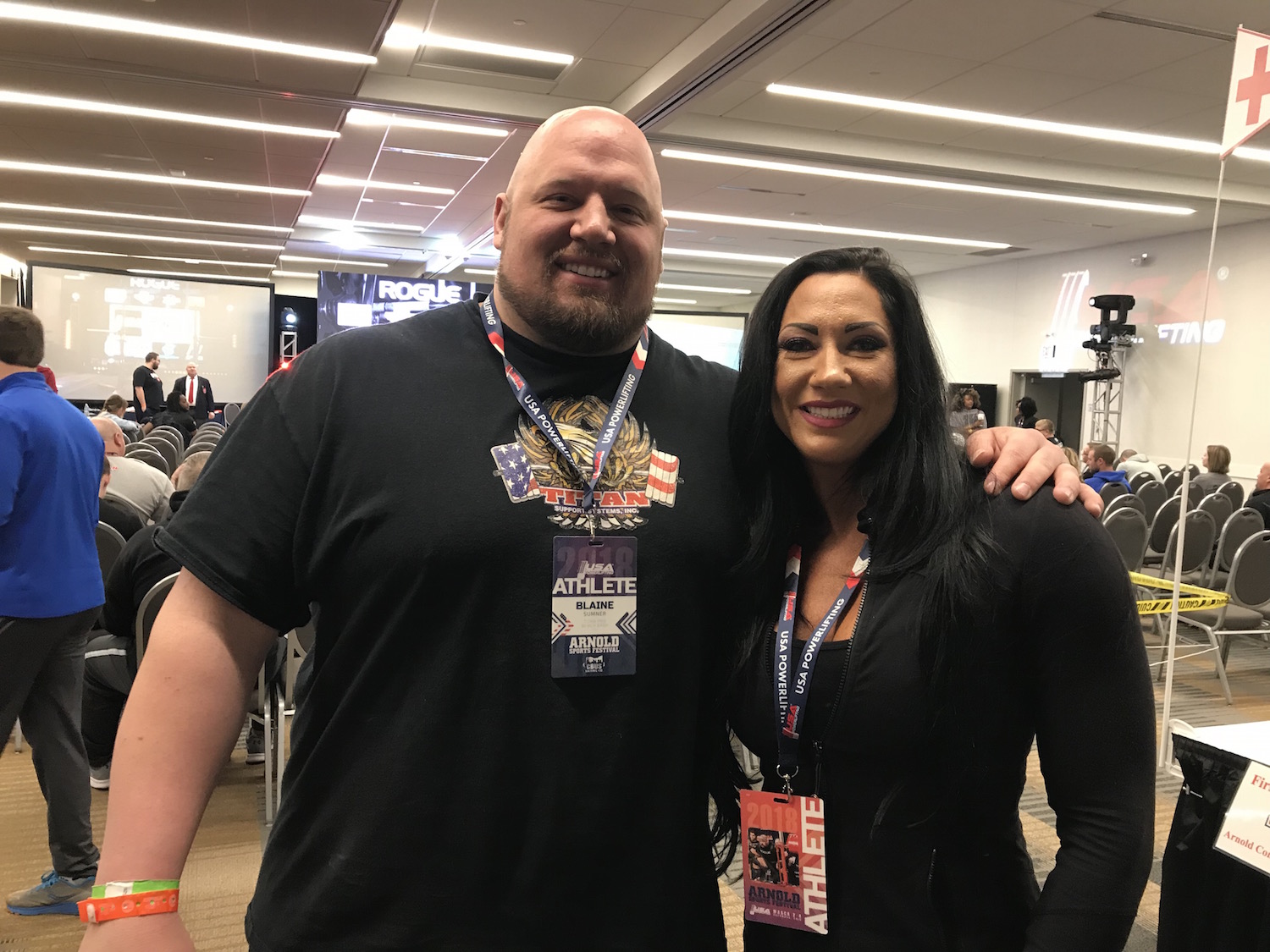 Before we say farewell to the 30th Arnold Sports Festival, come on along as we take another walk through the Greater Columbus Convention Center and meet a few of the folks who make the Arnold such a memorable event.

Beauty and the Teddy Bear Compete at the Arnold
For the past several Arnolds, Jessica LaCour has watched her powerlifting mountain of a husband lift impossibly heavy weights.

Blaine Sumner set the world record in the squat (1,113 pounds) at the Arnold in 2017. This year he was close, oh so close, to squatting 1,135 pounds, “but I was turned down by the judges, they said I was a little high,” the Wyoming resident said with a shrug.

“It’s been such an amazing experience coming here every year and watching, and being competitive is in my blood, so I said why not,” LaCour said of her first big competition.

And please, no Beauty and the Beast jokes for this couple. It’s more like Beauty and the Teddy Bear. While Sumner can get pretty intense on the platform, when the competition is over, he reverts back into being a mild-mannered petroleum engineer (his full-time job in Wyoming) who enjoys chatting with his many fans.

“Off the platform I’m pretty easy going,” the Wyoming resident said. “But then, when I compete, I flip the switch. I release the monster inside.”

His biggest thrill at Arnold 2018? “Definitely watching my wife in the amateur figure, that was awesome.” See, we told you he was a gentle giant.

The two train together “but we have completely opposite workouts,” LaCour said. She lifts lighter weights lots of reps, while Sumner does fewer reps of much more massive weights. “And, as we’re ramping up to compete, he’s on 10,000 calories a day and I’m on 1,000,” LaCour said. “But we do have the same competitive mindset and push each other to get better.”

The Classic Physique Makes a Comeback
Breon Ansley said he owes Arnold a thank you, and maybe a beer or two.

He was the winner of the inaugural Arnold Classic Physique professional competition, a new event that limits a competitor’s weight based on their height. “Arnold was the biggest reason the classic division was created,” Ansley said. “It came from the comments he made about how (bodybuilding) is losing its aesthetics and losing that athletic look and, not even a year later, this division was created.”

And, like so many Arnold competitors, he enjoys mingling with his rapidly growing fan base. “That’s the only way to be,” Ansley said. “There was so much buzz and support and the hall was really electric. It’s so nice to see all these smiling faces who support what we do and are in your corner, and we have to give something back and show our gratitude.”

There’s An Event For Everyone at the Arnold
During the Arnold Sunday Showcase & Coffee With The Champions, Arnold talked about how proud he is that the Arnold welcomes everyone.

“We have competitions for people with handicaps, but you can’t really call it a handicap when you see the amazing things they can do,” he said. “And we have Special Olympics kids competing here. We want everyone included in this movement.”

This includes Daniel Minster from the Czech Republic, who finished fourth in the Arnold Classic Pro Wheelchair bodybuilding competition – one of the festival’s most popular events. “No English,” he said, so his interpreter helped us interview this world-class bodybuilder.

“He was in a car accident … and he said it is very important for him to do this and to be successful,” the interpreter said. “He is very goal-oriented and is also very low key and doesn’t like publicity. This is his second time here and it is because of the prestige and quality of the competition.”

Grab A Pole and Start Swinging
One of the joys of the Arnold is discovering new sports, like pole fitness.

“I come from a dance background, and so I was attracted to the pole because of all the strength you need and flexibility and the variety of tricks and all the people I’ve met,” said Libby Ives, a Canadian who won the women’s open competition in 2017, but didn’t place this year.

The Arnold has helped introduce the sport to lots of people. “We do demonstrations in the concourse and a lot of people saw that and then came upstairs to watch the competition, so that’s really helping to spread the word,” Ives said. “We’re starting to get some traction and the International Pole Sports Federation is trying to get our sport into the Olympics.”

Ives has become a big fan of the Arnold. “It’s overwhelming. You can’t realize the variety of sports until you’re here. I thought it was mostly bodybuilding and weightlifting, but no, there’s fencing and jump rope and gymnastics, and I even saw axe throwing.”

Your Body Is My Canvas
Jani Kaaria is an artist – and his canvases are the best bodies in the world.

“It is like painting a car, it’s all in the technique and keeping the same pace,” said Kaaria, who works for Jan Tana, the company that applies the instant tans to all the bodybuilding and bikini competitors at the Arnold.

Joseph Larsen, an amateur Men’s Physique competitor was kind enough to let us watch as Kaaria tanned him up. “Lift your arms,” Kaaria said, and began applying the special Jan Tana base-coat blend up and down Larsen’s sides.

The base coat is applied the night before a competition, everywhere expect the face, hands and feet. The stage color, skin prep and body gloss coats are applied right before the bodybuilders take the stage – and includes their face, hands and feet. And yes, this means they can’t shower once the base coat is applied, and, if a competitor advances to the finals the next day … they still can’t shower and may be a little ripe by the time they hit the stage.

Kaaria continues applying an even tan up and down Larsen. “Grab it,” he says as he begins coating his hip and inner-thigh areas. “Now, turn sideways,” he says and applies tan to the right side. “Other side please.”

Then it’s the back, and then the neck area and, finally, the arms. The entire process takes about three or four minutes.

“You don’t want to get drowned out by all the lights on the stage, the tan makes your definition pop,” the well-defined Larsen said.

“A little, especially when you sweat,” Larsen said, adding he uses dryer sheets to wipe off the sweat.